This weekend was the Buckley 5 mile race in Lowell, IN. It is part of the XYZ Trail Race Series in Northwest Indiana. The trail series is a fun and competitive event scored on paced on a runner’s placing at the races. The group is organized through the Extra Mile Fitness Company out of Valparaiso, Indiana.

In registering for the race, there was no options to choose a shirt size. I didn’t even notice it going through the online sign up. A few days after I had registered, I received an email from the race director apologizing that they had not asked for shirt size- and asked what size I would need. I was impressed by the customer service. I had high hopes for the organization for the actual race.

The actual race started near the entrance of the Buckley Homestead. The race was to start at 7:30 AM sharp on Saturday July 22, 2013. However, torrential downpours the night before made it difficult to get volunteers to some of the mile markers since some of the trails were flooded (we still ran through the flooded trails). This caused a 10 to 15 minute delay at the start. The rain was coming down steadily at the start of the race.

There was a runner who was dressed as the farmer (he looked like Joe Dirt with his wig on). Anyone who beat the “farmer” would get a beer glass. The “farmer” for the race looked like a young kid who would actually be fairly quick- I’m guessing the race directors didn’t want to pass out too many beer glasses.

The race started out on the roads. It was basically a 3 mile out and back road section with a few hills. I started out fairly conservatively, and at one point this “farmer” was about a 100 meters ahead of me. I didn’t think I would be able to get him. My plan was to start conservative for the first half of the race, and then pick up the pace the second half. This was before I realized the first half of the race would be all road, and the second half would be mostly trail. I stuck with the plan, knowing that my pace wouldn’t be quicker due to the sloppy trails, but I would pick up the effort in the trails. I brought a pair of road shoes and a pair of Altra trail shoes to the race. I’m glad I did, as once I found out about the first 3 miles of the course, I was able to switch out to my road shoes. I was planning on it being mostly trail before I had arrived to the race.

My pre-race plan was going smoothly. At 2.5 miles, I was 100 meters or more behind the “farmer”, and this is when I picked up the effort. By the 3 mile mark, I knew I had a good chance to catch him, and I had passed a slew of other runners. I also knew we were hitting the trail section of the course, and this would play to my advantage, since I love trail running in inclement conditions. The trails were slippery, and I could tell runners ahead of me were being extra cautious. This allowed me to catch a few more people, and then finally, right before the 4 mile mark I caught and passed the farmer.

At about 4.5 miles is when we hit a flooded section of the trail. The water was up to my knees, which made it difficult to run in. At this point, a guy I had passed earlier caught me and passed me in the water. He seemed to have an easier time navigating the flooded trail than I did. We got out of the water with less than a half mile to go, and we raced to the finish. He was able to beat me, and I finished 14th overall in the field with a time of 37:51- not bad for trying to navigate muddy/flooded trails for the last 2 miles. The course was also a tenth of a mile long, but this wasn’t an issue, it just meant runners were able to get more time for more fun!  Later, I found out the course did have to be rerouted some due to the storms the night before, which accounted for the longer course. The “farmer” was close behind, and he finished 15th. I was disappointed no one was at the flooded trail to take photos, as it would have made a sweet photo op for the race.

Overall, the race was well organized, and it was extremely fun, especially the last two miles in the trails. The prizes were great, and the “beat the farmer for a prize” element added intrigue to the race for me, and literally gave me an additional goal to literally have my sights on during the race-  since I was staring at his back for the better part of the first 4 miles. 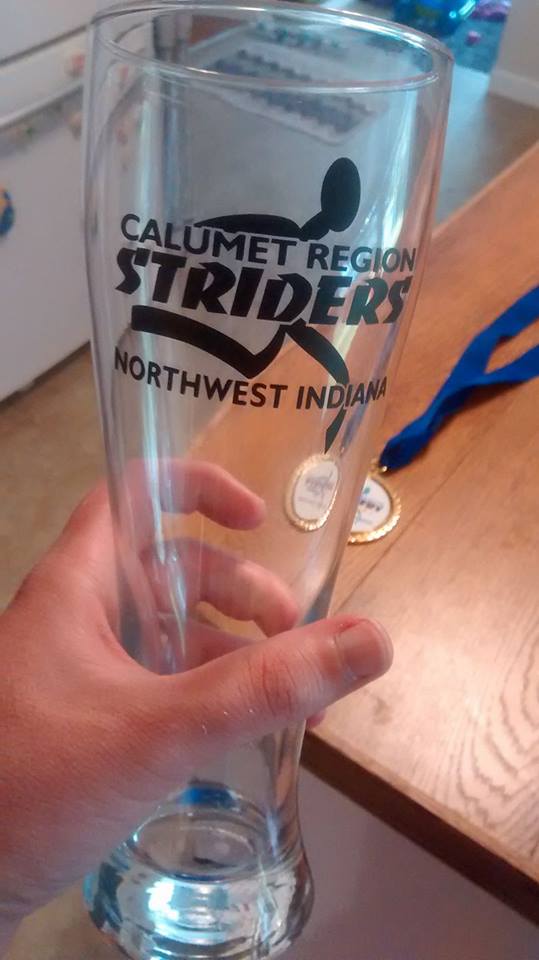 Thanks for visiting our site! Enjoy looking around, check us out on Facebook, and follow us on Twitter. Let us know what you would like to see on our site, we’re always open for suggestions! I hope you find our blog informative and enjoyable!